NaslovnicaAktualnostiConference of the International Commission for the History of Towns (ICHT), Split, September 20-22, 2021- PROTAGONISTS OF URBAN ORDER FROM THE ANTIQUITY TO THE PRESENT 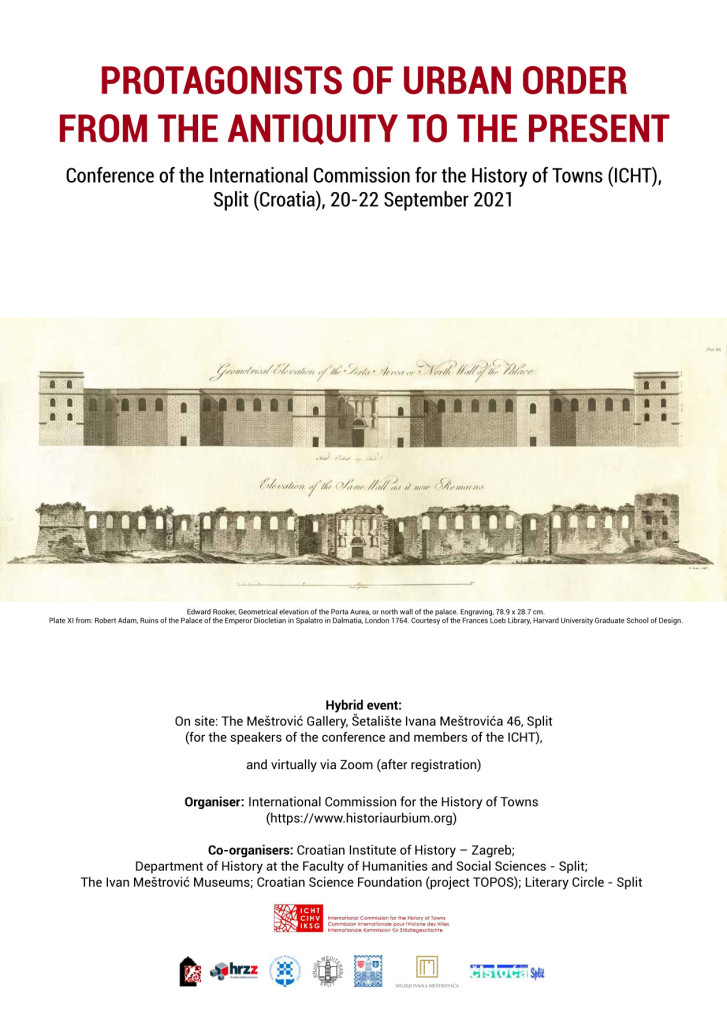 Protagonists of Urban Order from the Antiquity to the Present

Call for papers for the Conference of the International Commission for the History of Towns (ICHT), Split, September 20-22, 2021

Organiser: International Commission for the History of Towns

Throughout history, the city has been a symbol of order in terms of spatial, social, constitutional, and economic organization. Urban order is complex, multi-layered, and multifaceted – it can imply progress, harmony, and justice, but also surveillance, restrictions, and inequality. Its notions and meanings have changed over time, along with the transformations in politics, society, and knowledge.

This conference (the first one dedicated to a new topic in the 4-year programme on Urban Order) will focus on various types of protagonists of urban order acting at different levels, through different channels, and with different means, including diverse cultural and administrative traditions, preferences, and resources. The character and the position of these protagonists of urban order tend to change with the course of time and also require a comparative regional view. Whereas some have promoted the idea of urban order in theory, others have decided on its implementation on various levels or put the idea of order into practice. Sometimes, different urban orders can exist within a city, created and chosen by a variety of institutions and groups with their different systems of rules. Urban order has often been a result of overlapping influences of various protagonists and their interactions (simultaneous or as intertwined layers from different periods).

The conference papers will be grouped thematically in four sessions to address the proposed issues:

(1)    Secular authorities and their officials

The role of municipal governments in introducing and preserving social, political, and spatial order has been irreplaceable. Historically, lords and rulers could significantly influence urban order on different levels. States and empires, especially in the early modern times, changed the urban order juridically, institutionally, and spatially – from their centralised standpoint and via specific offices. Depending on the period in question and the type of the city, the bureaucracies of the secular authorities implemented different techniques, policies, and legislative strategies to maintain urban order.

Papers in this session should address the following issues:

How did the municipal governments provide orderly cohabitation and promote the ideas of order?

How did kings and lords introduce order in the cities under their authority to maintain territorial, political, fiscal, and economic control?

How did the central authorities and their officials cope with different legal, administrative, and political frameworks in early modern cities?

How did emperors and their governors maintain urban order in long term and across large territories (where urban population often varied culturally and ethnically)?

How did modern states and their bureaucracies discipline, civilize, and/or rationalize cities in order to ensure well-ordered government and modernisation?

Making the ‘Invisible’ Visible: Spaal Pracce and Urban Design in the Reign

The roles religious institutions have played in shaping towns and cities are crucial, but they have also preserved a semblance of order in the administrative sense, pervading and ordering the townspeople’s lives (observances, life rituals, ethics). The structure of ecclesiastical institutions has always been highly organised and ordered both vertically and horizontally (bishoprics and parishes, rules of religious orders, strict internal hierarchies).

The main issues to be addressed are:

How did different confessional communities and institutions enforce secular urban rules and the notions of moral order?

How did the persons or institutions involved in secularization and even “laicization” of the societies influence the evolution of concepts on urban order and their practical application (such as the regulation of processions, funeral processions, or public prayers)?

How did religious institutions maintain urban order in cities with confessional plurality?

What happened to those who struggled against the religious order – dissenters within and without, those who did not obey the order or displayed scepticism?

Effective execution of different measures aimed at establishing or maintaining urban order has always relied on the active engagement and compliance of the urban population. Urban order could be expressed through an apparatus such as the legal system and its officials, but also through the urban community that contributed to its establishment through various aspects of socialisation – hierarchies, ordered social relations and rules, and the sense of responsibility for the common good.

We invite the contributors to engage with the following questions:

What was the role of urban elites or commoners in maintaining urban order?

How did various interest groups and social institutions (such as the family or professional groups) influence the urban order?

How did certain individuals (officials, philanthropists, churchmen, or artists) influence the urban order as permanent or temporary residents?

Which social groups experienced the urban order as unacceptable and inappropriate, or simply understood it in different ways?

How do various types of protestors, youth groups, or urban gangs threaten urban order / cause disorder?

There have been many other protagonists of urban order, and in different types of cities. As diverse agents involved in creating and maintaining urban order, different protagonists have acted institutionally or as individuals and groups, with their specific powers and limits. Situations such as natural disasters, epidemics, wars, or massive population influxes have always proved particularly challenging to the political, social, economic, and cultural order.

Some of the proposed questions in this session are:

How and through which institutions have public health and environmental problems been regulated in urban communities?

What has been the role of the police and the military in maintaining urban order?

What impact can local or external investors have on urban order?

How do different authorities overlap in maintaining urban order?